Starbucks is out with the pumpkin spice latte, which means only one thing! Fall is sneaking upon us, and there is ton of prep work to do outside to prepare our flowers and gardens for winter. If you’re relatively new to growing roses, or your roses didn’t fare too well throughout the last winter winter – you’re going to need to know how to prune roses in the fall. Pruning roses in the fall is essential for rose health. It encourages their dormancy throughout winter, prevents them sprouting new shoots to early, and protects against rose diseases. To prune roses in the fall, you’ll need to

On the tail end of summer, there are a few things you can do before fall has ever shown its first signs of arrival. Coupled with pruning, they will increase the chances of your rose surviving winter by quite a bit.

You might have heard this advice already, as it seems to come up every time there is talk about fertilising – and not without good reason!

Gardeners consider fertilising season to be from mid-spring months to late summer months. Fertilisation is a process meant to stimulate new growth, fresh canes and bigger flowers. You do not want your rose to be doing any of this during colder months!

Any perpetuated new growth has very low chances of surviving the winter, which will in turn affect the chance of survival of your entire rose plant.

To battle this at the root, gardeners generally suggest to stop fertilising anywhere from 6 to 8 weeks before the first frost is anticipated to occur. Depending on where you are located in the world – in the northern hemisphere, that’s usually around the end of August, beginning of September, as first frosts are anticipated in late October.

This is not so important if you are lucky enough to be living your life as a Cali girl or a Mediterranean beauty where winters are more mellow, but in harsher northern climates where white Christmas is not just a Bing Crosby song, it is essential advice.

As well as ceasing fertilisation, now is the ideal time to stop pruning as well.

If there are things you need to attend to immediately (eg. dead or diseased branches), prune away only the affected parts of your rose. If not, kiss those secateurs goodbye – for a little while.

The next time you will be pruning your rose is after the first frost has hit. If you keep on fertilising and pruning, your rose plant will be sprouting new growth like wildfire.

In reality, now is not a good time for this. The rose needs to finalise the blooming season, develop rose hips and start slowly preparing for winter. Any new shoots that start developing now will have a real bad time when the frosts hit. In turn, this will stress out your rose. Roses growing now will mean less energy and strength for your rose to bloom when it is truly meant to – in spring and summer! Plus any new growth is likely to be weak and spindly.

Your job is to remove it – a good rule of thumb is anything thinner than a pencil gets removed.

How to prune roses in the fall – best tips

Wait after the first frost has passed

Said it four times and I will say it the sixth – wait after the first frost has passed! There are several good reasons to take this advice like gospel.

Not waiting to prune your rose after the first rose stimulates growth. It is still fairly warm and the rose will think that the blooming season is not over yet.

Allowing new growth in winter is not good. Winter will likely rot away any new growth anyway, but there is a big chance the growth will not be healthy in the first place.

Worst case scenario, down the line you may expect to see signs of winter dieback disease. This disease can be nasty, causing further damage and danger for the whole plant if not recognised and treated in time.  Not pruning properly can also trigger other common rose diseases such as rose blackspot.

After the first frost, you are free to snip away.

Make sure the diseased, dried or dead canes go first. If they are very thick, cut them off at the base with a gardening saw.

You do not want to face a winter with diseased canes. Not only will the disease spread in those unfavourable conditions, but sick shoots have a lower chance of surviving winter straight off the bat as they are much weaker.

How Much Of My Rose Bush Should I Prune? Do not be afraid to take up to a third of your overall rose volume back! This time of the year, you can really just get in there with your pruners and hack back without fear.

Generally, don’t worry about over-pruning, as it is nearly impossible to do. Your rose is slowly preparing to hibernate and needs to focus its energy into the roots to survive the cold conditions. Even without the aid of your pruning, a rose will drastically reduce the amount of energy it would usually put into growing the stems and leaves.

Therefore – do not worry, you are not hurting your rose, you are helping it!

Cut into a bush-like shape

It is called a rose bush for a reason! During the summer, your rose probably became quite top-heavy. The stems grew tall, the blooms reached high. However, cutting it back into a bush is the prime way how you should prune your roses in the fall.

Depending on where you live, as fall progresses, you might begin seeing severe bouts of storms and winds. Long canes that you leave unchecked, especially in taller and heavier varieties, are prone to breaking off quite easily.

If you decide to skip your fall pruning, you might just wake up to see that Mother Nature has taken care of it – and you won’t like that one bit.

In case your uncut rose survives heavy winds, it just might not survive ice and snow. During the frostiest winter days, accumulates of ice and snow are potentially dangerous to a rose. They might weigh down on long canes and break them. If the cane falls onto the bush with all the ice and snow, the combined weight might destroy the shape of your bush. In that case, you will be forced to fully cut it back in springtime. This is terrible, as during spring your rose is supposed to be growing, strengthening and ready for flowering. If that happens – don’t expect a prolific blooming season.

Make cuts at a 45 degree angle

An old classic that applies no matter the season. With sharp pruners, make sure to angle your cuts at a 45 degree angle, instead of making them perfectly horizontal. The reasoning behind this is that when it gets rainier, angled cuts prevent pooling and collecting of water at the place of the cut. Considering that every cut made while pruning is a wound that must heal, pooling of water at that area is bad news. Stale water carries risk of developing bacteria and fungi. Nothing could be worse for the newly sensitive part of your rose. Additionally, it is a great entry point from which the entire rose can be affected and infected. If left unchecked, this easily leads to rot.

Disinfect each cut afterwards, using rubbing alcohol – or use a natural, organic soap and water solution if you don’t have any alcohol to hand!

An additional tip is to seal the cut with wax. This is sure to keep out any microbes you don’t want near your prized rose!

Your clothes, your mask, your hands, your rose-gardening tools! It’s 2020 after all, y’all! After every cut, and especially when cutting diseased or dead canes, make sure to swipe your blade with a cloth dipped in rubbing alcohol. This will prevent the spread of any possible carriers of mold, rot or disease. It will also keep you from wondering why your freshly pruned rose is showing distress symptoms!

Clean up around the base of your rose

You have pruned away healthy stems, removed the dead ones, angled your cuts, cleaned the tools…the only thing that is left is to clean up the base! Remove any debris or rotten leaves from the surface of the soil – this will allow your rose to breathe.

How To Prune Climbing Roses In The Fall Now that you are an expert on how to prune roses in the fall, learn more about overwintering your roses in pots!

How to Make a Gorgeous Rose Trellis! 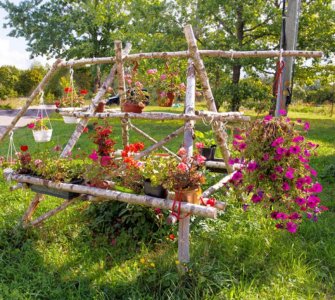 What are the Best Roses for Cold Climates?